Lots of activities and projects mean less time to write about them.  A summer that although is definitely not over yet (we have two weeks to go before schools call their students back), but one that saw many successes and challenges for both humans and equines alike.  Running off the back of the ‘Horse and Pony Show’ we were suddenly famous and even now I still hear people say to each other “were you there?” like it was a Royal wedding!

The busiest weeks in July I was lucky enough to have help from the US in the form of ‘Monica’ an 18 year old Tufts College student, with a lifetime of riding experience under her belt.  She was great to have around and a Godsend to the horses, myself and the children.  Backed up by Tola Broderick who also did her bit ably before she headed out on her European summer tour with her family.

During this time probably one of the the sweetest connections I have seen, developed between Chippy and Coralie.

Very young and having never ridden before, Coralie and the little Appaloosa pony – who ‘does not suffer fools gladly’ for any long period of time, just hit it off!

These connections between animals and humans are very hard to explain, at the end of the day many children are kind and attentive and keen – but sometimes there is just something that ‘clicks’.

Here’s a pic of Kate riding Lady into part of the construction area that will soon be our new Arena.  Polo games next year for the Country Show! 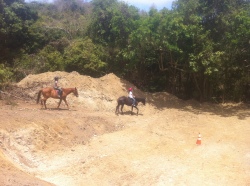 Here’s what happens when it rains. Good job that doesn’t happen too
often… 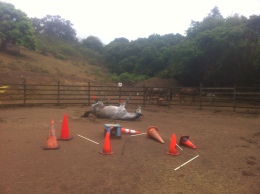 This is Mento’s effort for today.

Posted on August 16, 2015 by alisonknightsbramble